A KNOW-HOW ROOTED IN HISTORY
DISCOVER OUR HISTORY

The origin of firearms proofing in Saint-Etienne has not been clearly established. It was lost during the 17th century with the manufacture of firearms for war that Royal rule entrusted to contractors and artisans of Saint-Etienne. The centralised power put in place by Louis XIV sought to standardise the supply of arms and its armies by establishing the Royal Arsenal at the Bastille. At the head of this arsenal, Maximilien Titon, being given the privilege of supplying royal arms, set out to ensure the sound operation and safety of the arms he received.

Saint-Etienne contractors, approved to supply this arsenal, in turn had to ensure the quality of the arms they sent to Paris.
Following the establishment of the first laws on manufacturing arms in 1717, designed to standardise barrels in order to harmonise munitions supplies, proofing soon became mandatory.
Pierre François Girard, who was born and died in Saint-Etienne (1674-1751), a contractor of the King, is the first person whose incomplete records of Saint-Etienne preserve the memory of him having established a proofhouse. The existence of this proofhouse, set up by Pierre Girard at the Chavanelet ford in the district of Heurton, was certified in 1743.

With the establishment of arms of war production in Saint-Etienne under the status of Royal manufacture from 1764, which required that gunsmiths working on these supplies work exclusively for the King, the distinction between the production of weapons of war and hunting weapons, called bourgeoises, became increasingly apparent.

For several years, the proofing of bourgeoises arms was subject to divergent discussion between Royal rule, which wanted to ensure a minimum level of quality and safety for using arms supplied to the market, and private artisan gunsmiths who wanted their independence.
As this proof was still only carried out by the Royal manufacturer’s proofhouse, under the control of State inspector and controllers, barrels were proofed based powder loads used for war! Faced with too many failed proofs for bourgeoises arms, “civil” gunsmiths in Saint-Etienne demanded that proofs for hunting firearms be more lenient and separate from those of firearms of war. They were finally satisfied by decree of the Council of State of the King on 17 January 1782.

THE BIRTH OF THE PROOFING HOUSE

This date in 1782 therefore marks the real birth date of the current proofhouse.
Augustin Merley, a renowned gunner from an old Saint-Etienne gunsmiths family, was the first to prove bourgeoises guns, appointed, from among the three candidates put forward by the town, by the intendant of Lyon in 1782.
With guns not yet being loaded via the breech, only barrels were proved, fixed horizontally to a bench, with the heel of the breech against a strong strip of iron. If the barrel resisted without deforming under the test load, the prover marked it with the sacrosanct proof mark, a real guarantee of confidence between the seller and purchaser.

Bearing the reputation and trademark of the Saint-Etienne armoury, this mark depicted crossed palm leaves, the symbol of the martyr of Saint-Etienne, the patron saint of the town.

With the Revolution and the abolition of all royal prvileges, Augustin Merley had to abandon the approval of arms and the revenue he earned from it.

This approval was re-established in 1797 upon the request of gunsmiths for whom it had provided an essential technical and commercial advantage.

Augustin Merley retired in 1809, too old and having to face the incessant increase in the cost of powders. The following year, an imperial decree regulated the proof for the entire Empire, which then included Liège. Augustin Merley’s nephew was appointed as prover. In the unions responsible for monitoring the proof we find the following names of known gunsmiths and gunners at the time: Romain Peurière, Jean-Baptiste Thomas, Merley-Chauve, Hugues Vignat, Jean-François Chaleyer and Giraud-Dumarest.

Fraudulent proof was still prevalent and it was necessary, for example, to change the mark, stolen or lost in 1824 to avoid non-compliant proofs.

In 1836, Merley-Duon established a new proofhouse not far from the previous one, still on the Rue de l’Heurton.

The proofhouse entered a turbulent period from 1848: there were no more unions and the cost and validity of the proof was questioned by gunsmiths…
The prover Merley-Duon died in 1855. He would be the last private contractor for proofing. In fact, upon the request of gunsmiths from the town and the chamber of commerce, from 1856 and by imperial decree, management of the proof was entrusted to the Saint-Etienne chamber of commerce and industry. The proofhouse on the Rue de l’Heurton was bought from the widow of Augustin Merley, and Merley-Tivet, the former gunner and controller of the imperial Manufacture, was appointed as prover.
Its role having been secured, the proofhouse was located within close proximity to the gunners and gunsmiths who had to travel to it to have their weapons proofed. This move, by reducing  requirements travel between the gun-makers established in Rives for the Imperial Manufacture and the proofhouse, created a real gunsmiths district.

After 1880, the development of guns required that the closure be proofed as well as the barrel. From 1883, plans were therefore made to extend the proofhouse. The commission appointed by the chamber of commerce sought information on the installations recently established in Liège and purchased the land on which the existing building is located, Rue Jean-Claude, in 1885.
The very same year, the Farcy law of 14 August 1885 which liberalised the manufacture and sale of non-regulatory arms, at the same time also challenged the obligation for proof. But once again, conscious of the technical and commercial value that the proofing added to their products, gunsmiths demanded that the proof be retained for fear of seeing competitors falling short in terms of safety. The chamber of commerce decided to keep the proof, and even to supplement it with proofs for finished guns.
By decree of 7 November 1895, the Saint-Etienne and Paris chambers of commerce were confirmed as managers of their respective proofhouses. Although proof was not made obligatory, as demanded by gunsmiths, this decree nonetheless recognised it as official.
The chamber of commerce then began to extend its premises again. Between 1903 and 1908, based on plans by the architect Lamaizière, a new, larger more modern proofhouse opened on the Rue Jean-Claude Tissot.
The Rue de l’Epreuve nearby still preserves the memory of the proofhouse of the time, now destroyed.
1910 was a pivotal year in the history of firearms proofing with the meeting of an international commission (France, Germany, Belgium, Austria and Italy) seeking to standardise firearms proofing from one country to the next and giving rise to the Commission Technique Internationale (International Technical Commission), which soon became the Commission Internationale Permanente des armes à feu (Permanent International Commission for the Proof of Small Arms, commonly appreciated to CIP).
As had already been the case in 1870 but larger and more permanent, the proofhouse was used to proof guns and munitions for war in 14-18.
They then had to wait until 02 July 1960 for a new key stage to be achieved with the re-establishment of the obligatory proof and confirmation of the CCI in managing the Saint-Etienne proofhouse.
To facilitate the proofing of mass production by some businesses, this year also saw the creation of three annexes to the proofhouse: at Manufrance (St-Etienne), Gevarm (St-Germain-Laval, Loire) and the SFMM (St-Jean-de-Muzols), Ardeche).

From 1973, the Saint-Etienne proofhouse was entrusted with managing those of Paris and its annexes in Mulhouse, Bayonne and Hendaye. Paris was closed in 1978, making Saint-Etienne the only proofhouse in France.

At the start of 1988, the proofhouse moved to new premises, at 5 Rue de Méons, in the industrial park of Molina Nord. Faced with a evolving firearms market following changes in the social status of hunting, this new installation allowed the proofhouse to utilise its expertise, particularly in testing new protective equipment. 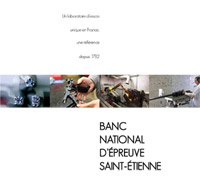 HISTORY OF BANC NATIONAL D’EPREUVE: MORE THAN 200 YEARS OF INNOVATION

« A unique laboratory in France, a reference since 1782 », EMCC publishing and re-printed in October 2014.

Museum of Art and Industry of Saint-Etienne : www.musee-art-industrie.saint-etienne.fr